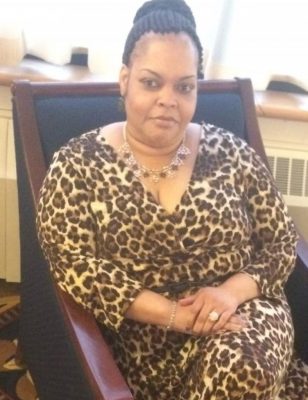 Overseer Ann Elizabeth Coles II(“Overseer Ann”) is a native Washingtonian and the Mother of one son Charles Daniel Carrington II .At the age of five, she began to seriously learn more about the Man called Jesus Christ and then developed a personal relationship with Him. Experiencing the physical and spiritual struggles of youth life, Overseer Ann had solace, stability, and motivation from the late Rev. Sidney T. Yancey(“Rev. Yancey”), Senior Pastor of Mt. Pleasant Baptist Church. Rev. Yancey’s counsel was of great significance to Overseer Ann because he explained the stages of psychological and spiritual development which opened Overseer Ann’s understanding and kept her strong in the Lord.

As she grew in Christ, Overseer Ann desired to become a Missionary because she wanted to help others in need, which is a part of her Ministry today. From 1998 to 2001, Overseer Ann attended Northern Virginia Community College, Alexandria, Virginia, where she received a Certificate in Business Communication. She worked for The United States Patent and Trademark Office for 15 years(1990-2006)as a Legal Instrument Examiner for Patent Technology Center 3600. While employed at the Agency, Overseer Ann served as an Equal Opportunity Counselor where she settled discrimination disputes among Management and Employees.

Later, she was promoted to Union Representative. In 2006,Overseer Ann retired due to health issues, but enjoyed the privilege of being able to stay at home with her son. Despite her health issues, Overseer Ann became the primary caregiver for her late parents. Overseer Ann officially answered the calling of God on her life in 2007. She attended the National Church of God Bible College, but after a couple of classes decided to change her major from Biblical Studies to Psychology at the University of Phoenix.

The reason forth is decision was for her to obtain higher education of human behavior and correlate that knowledge for evangelistic purposes in Ministry and Business. She has obtained an A.A. Degree in Psychology from the University of Phoenix and attends Liberty University with a Concentrating on Theology. Overseer Ann’s educational endeavors is for the sole purpose of meeting the physical and spiritual needs of people and the management of Ministry.

Overseer Ann’s Ministry is under the spiritual covering of Bishop Prelate Keith Wright of Liberty Pentecostal Fellowship in Bronx, New York, and locally covered by Rev. Dr. Jacqueline G. Stevens and the Miracle Fellowship Gospel Ministries, Inc. Overseer Ann is the Founder of “Put Your Guns Down and Life Your Hands Up Movement ”whose mission is to see families and our communities strengthened to become self-sufficient through “KLOC’s” Community Outreach Programs such as: Literacy Training, Drug and Alcohol Abuse Awareness Groups, Health and Wellness Programs, Re-entry Support Group, Domestic Violence Support Group “Voices in the Valley”(Men and Women), and Spiritual Awareness.

Overseer Ann is affiliated with the following Community Service Organizations:

In January 2017,under the leadership of Bishop Prelate Keith Wright, Overseer Ann was installed as the Senior Pastor of “Kingdom Life Outreach Center”(“Kingdom Life” )located in Prince George’s County, Maryland and Washington, D.C. At Kingdom Life, Overseer Ann preaches and teaches God’s Word, provides vision, understanding, encouragement to work with Ministry Officers and Congregants to develop and organize Ministry opportunities for edification, and develop Outreach Programs that bring impact into the Community. Another elevation of Ministry status occurred in 2020 when she was appointed as Overseer.

Overseer Ann’s Central Message is “Can You Past the Love and Forgiveness Test “Scripture references: Matthew 22: 37-40; Mark 12:29-31; and Luke 10:26-27. She continuously teaches by spreading the Word and encouraging those who have compassion and love for mankind.

On May 7, 2020, Overseer Ann Coles II was conferred an Honorary Master and Doctor of Ministry Degree and appointed Second Assistant Apostle over Commencement and Ordination Services by the Miracle Fellowship Gospel Ministries, Inc. of Hyattsville, Maryland.

In addition, she is a DMV Faculty Professor of Ministry, Community and Global Outreach Evangelism, Psychology, and Social Change for Miracle Fellowship Gospel Ministries, Inc. The Official Ceremony this Honor and her Investiture as the Overseer was convened on Saturday, September 12, 2020.